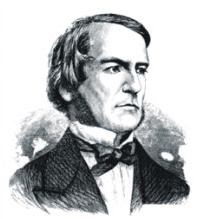 George Boole was born on November 2,1815. His father was a shopkeeper. He pointed out that there was a close relationship between symbols that represents logical instructions and algebraic symbols.Boole would be pleased to know that his Boolean algebra is the basis of all computer arithmetic.At the age of 24 George Boole published his first paper "Researches on the Theory of Analytical transformation" in the Cambridge mathematical journal.

The theory of sets as a mathematical discipline originated with the German mathematician George Cantor.George Cantor was born on March 3 , 1845.