A trigonometric ratio is the ratio of the lengths of two sides of a right triangle. The word trigonometry is derived from the ancient Greek language and means measurement of triangles. The three basic trigonometric ratios are sine, cosine and tangent, which are abbreviated as sin, cos and tan, respectively.

Let us consider the right ΔABC shown below.

The sine, the cosine, and the tangent of the acute angle ∠A are defined as follows.

The value of a trigonometric ratio depends only on the measure of the acute angle, not on the particular right triangle that is used to compute the value.

Compare the sine, the cosine, and the tangent ratios for ∠A in each triangle below.

By the SSS Similarity Theorem, the triangles are similar. Their corresponding sides are in proportion, which implies that the trigonometric ratios for ∠A in each triangle are the same.

Find the sine, the cosine, and the tangent of the indicated angle.

Find the sine, the cosine, and the tangent of 45°.

Begin by sketching a 45°-45°-90° triangle. Because all such triangles are similar, we can make calculations simple by choosing 1 as the length of each leg. From the Pythagorean Theorem, it follows that the length of the hypotenuse is √2.

Find the sine, the cosine, and the tangent of 30°.

We can use  a calculator to approximate the sine, the cosine, and the tangent of 74°. Make sure that the calculator is in degree mode. The table shows some sample keystroke sequences accepted by most calculators.

When we look back the above examples, we can notice that the sine or the cosine of an acute angle is always less than 1.

In the triangle shown above, we can have the following important trigonometric identities.

Suppose you stand and look up at a point in the distance, such as the top of the tree in the example given below. The angle that your line of sight makes with a line drawn horizontally is called the angle of elevation.

Jacob is measuring the height of a Sitka spruce tree in North Carolina. He stands 45 feet from the base of the tree. He measures the angle of elevation from a point on the ground to the top of the tree to be 59°. How can he estimate the height of the tree ? 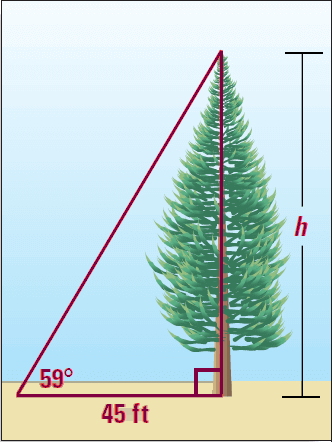 To estimate the height of the tree, Jacob can write a trigonometric ratio that involves the height h and the known length of 45 feet.

In the above right triangle, for the angle 59°, h is opposite side and the side has length 45 ft is adjacent side.

The trigonometric ratio that involves opposite side and adjacent side is tangent.

Multiply each side by 45.

Use calculator or table to find the value of tan 59° and substitute.

Hence, the tree is about 75 feet tall.

The escalator at the University Metro Rail Station near University of Miami in Coral Gables, Florida  rises 76 feet at a 30° angle as shown in the diagram below. Find the distance d a person travels on the escalator stairs.

To find the distance d a person travels on the escalator stairs, we can write a trigonometric ratio that involves the side has length d and the known length of 76 feet.

In the above right triangle, for the angle 30°, d is hypotenuse and the side has length 76 feet is opposite side.

The trigonometric ratio that involves opposite side and hypotenuse is sin.

Multiply each side by d.

Hence, a person travels 152 feet on the escalator stairs.