In this section, we will see some of sample problems from Olympiad math.

The four corners of a a square piece of paper of side 18 cm are cut off as shown below. The piece of paper is then folded along the dotted lines into a tray. What must be the length of each of four small squares so that the volume of the tray is maximum ? (Consider only whole numbers.) 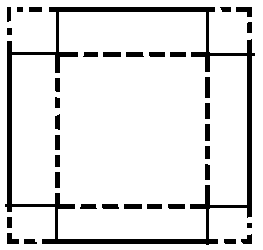 Let x be the side length of the small square.

By folding the given shape along the dotted line, we will get a cuboidical  tray.

If length of the square is 1 cm, then

If length of the square is 2 cm, then

If length of the square is 3 cm, then

If length of the square is 4 cm, then

If length of the square is 5 cm, then

So, the length of each of the four small squares must be 3 cm so that the volume of the tray is the maximum.

Compute the sum of all odd numbers smaller than 100.

By writing the odd numbers lesser than 100 as series, we get

To find the sum of odd numbers, we have a formula.

Let us use the second formula to find the sum of odd numbers.

Two goods train each 500 m long are running in opposite directions on parallel tracks. Their speeds are 45 km/hr and 30 km/hr respectively. Find the time taken by the slower train to pass the faster train.

Two trains are travelling in opposite direction.

Converting km/hr to m/sec, we get

After having gone through the stuff given above, we hope that the students would have understood math olympiad sample problems 6th grade