Find the Time Taken by a Train to Cross a Bridge or Tunnel :

In this section, we will learn how to find the time taken by a train to cross a bridge or tunnel.

Time taken by a train of length l meters to pass a standing object of length b meters is the time taken by the train to cover (l + b) meters. 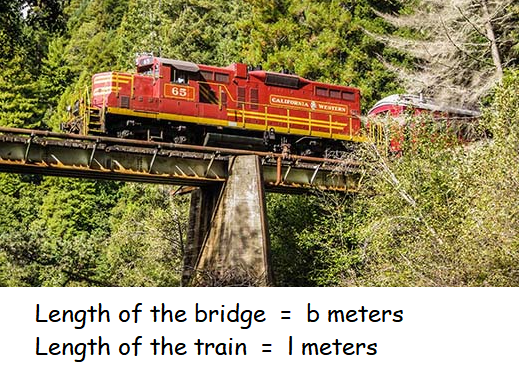 The relationship between distance, speed and time.

To convert minutes into hour, we should divide the given minutes by 60.

A train is moving at a speed of 132 km/hr. If the length of the train is 110 meters, how long will it take to cross a railway platform 165 meters long.

Moving object is train of length 110 meters and running at the speed of 132 km/hr.

Converting the speed from km/hr to m/sec

So, the train of length 100 m long is taking 7.5 seconds to cross the railway platform 165 meters long.

How long does a train 110 meters long running at the speed of 72 km/hr take to cross a bridge 132 meters in length ?

A man is standing on a railway bridge which is 180 m long. He finds that a train crosses the bridge in 20 seconds but himself in 8 seconds. Find the length of the train and its speed.

Let l and x be the length and speed of the train respectively.

The train of length l meters crosses a railway bridge of length 180 m in 20 seconds.

The train of length l meters crosses a man in 8 seconds.

After having gone through the stuff given above, we hope that the students would have understood how to find the time taken by a train to pass a man.