About "Classic definition of probability"

Let us consider a random experiment that result in a finite elementary events, which are assumed to be equally likely.

Then the formula for classic definition of probability is given by

Let A be the event in a random experiment.

n(A)  =  Number of possible outcomes for the event A

n(S)  =  Number of all possible outcomes of the experiment.

Here "S" stands for sample space which is the set contains all possible outcomes of the random experiment.

Then the above formula will become

To have better understanding of the above formula, let us consider the following random experiment.

A coin is tossed once.

Let A be the event of getting head.

This classical definition of probability has the following demerits or limitations:

(i) It is applicable only when the total no. of events is finite.

(ii) It can be used only when the events are equally likely or equi-probable. This assumption is made well before the experiment is performed.

(iii) This definition has only a limited field of application like coin tossing, dice throwing, drawing cards etc. where the possible events are known well in advance. In the field of uncertainty or where no prior knowledge is provided, this definition is inapplicable.

In connection with classical definition of probability, we may note the following points.

(a)  The probability of an event lies between 0 and 1, both inclusive.

(b) Non-occurrence of event A is denoted by A’ and it is known as complimentary event of A. The event A along with its complimentary A’ forms a set of mutually exclusive and exhaustive events.

Therefore, odds in favor of A and odds against A are the two ratios which are inverse to each other.

A coin is tossed three times. What is the probability of getting :

When a coin is tossed three times, first we need enumerate all the elementary events.

This can be done using 'Tree diagram' as shown below : 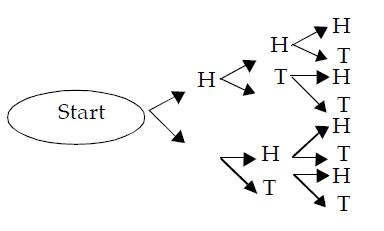 Out of these 8 outcomes, 2 heads occur in three cases namely HHT, HTH and THH.

If we denote the occurrence of 2 heads by the event A and if assume that the coin as well as performer of the experiment is unbiased then this assumption ensures that all the eight elementary events are equally likely.

Then by the classical definition of probability, we have

Let B denote occurrence of at least 2 heads i.e. 2 heads or 3 heads.

By the classical definition of probability,

After having gone through the stuff given above, we hope that the students would have understood "Classic definition of probability".

Apart from the stuff given above, if you want to know more about "Classic definition of probability", please click here