ANGLE PAIRS AND ONE STEP EQUATIONS

Adjacent angles are pairs of angles that share a vertex and one side but do not overlap.

Complementary angles are two angles whose measures have a sum of 90°.

Supplementary angles are two angles whose measures have a sum of 180°. We discovered in the Explore Activity that adjacent angles formed by two intersecting lines are supplementary.

Look at the diagram given below and answer the question. 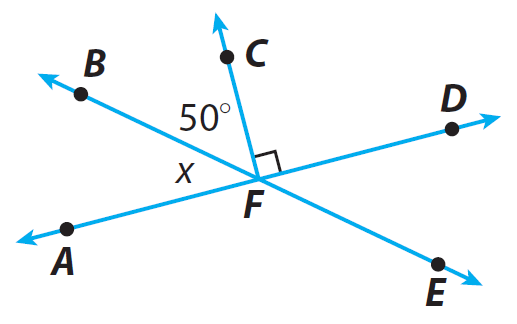 A. Name a pair of vertical angles :

Vertical angles are opposite angles formed by intersecting lines.

B. Name a pair of adjacent angles :

Adjacent angles share a vertex and a side but do not overlap.

D. Name two pairs of supplementary angles that include <DFE :

Any angle that forms a line with ∠DFE is a supplementary angle to ∠DFE.

Use the fact that ∠AFB and ∠BFD in the diagram are supplementary angles to find m∠AFB.

From the given diagram, we have ∠AFD  =  x and also

Subtract 140° from both sides.

Find the value of 'x' in the diagram given below. 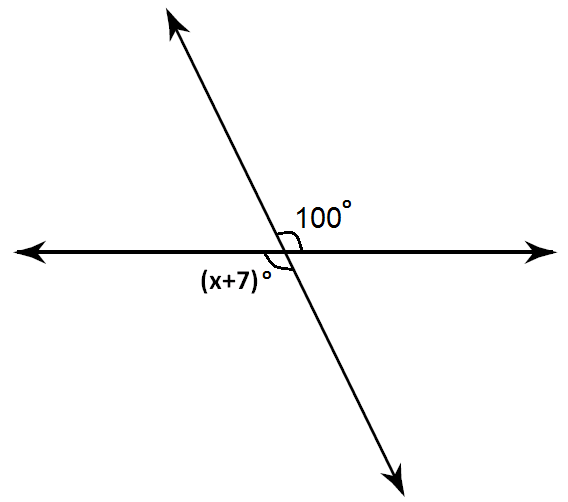 From the picture above, it is very clear (x+7)° and 100° are vertical angles and also they are congruent.

Subtract 7 from both sides