The angle of depression is an angle formed by the line of sight with the horizontal when the point is below the horizontal level. That is, the case when we lower our head to look at the point being viewed. 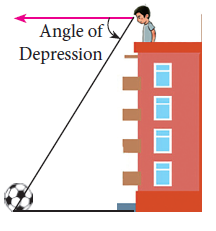 To find questions 1 to 3, please visit the page "Trigonometry Word Problems with Angle of Depression"

An aeroplane at an altitude of 1800 m finds that two boats are sailing towards it in the same direction. The angles of depression of the boats as observed from the aeroplane are 60° and 30° respectively. Find the distance between the two boats. (√3 = 1.732)

tan θ  =  Opposite side / Adjacent side

A lift in a building of height 90 feet with transparent glass walls is descending from the top of the building. At the top of the building, the angle of depression to a fountain in the garden is 60°. Two minutes later, the angle of depression reduces to 30°. If the fountain is 30√3 feet from the entrance of the lift, find the speed in ft/sec of the lift which is descending.

In the diagram above, in the right triangle ABC,

So, the speed of the lift which is descending is 0.5 ft/sec.