In this section, we will learn how to solve word problems involving the shapes square and rectangle.

The side of a square exceeds the side of another square by 4 cm and the sum of the area of two squares is 400 sq.cm. Find the dimensions of the squares.

Let x be side length of one square

Area of one square with side length x  =  x2

By dividing the entire equation by 2, we get

Therefore sides of one square is 12 cm.

The length of the rectangle exceeds its width by 2 cm

Here x represents width of the rectangle. So, the negative value is not possible.

The footpath of uniform width runs all around a rectangular field 28 meters long and 22 meters wide. If the path occupies 600 m² area, find the width of the path.

Let x be the width of the path

Length of the rectangular field  =  28 m 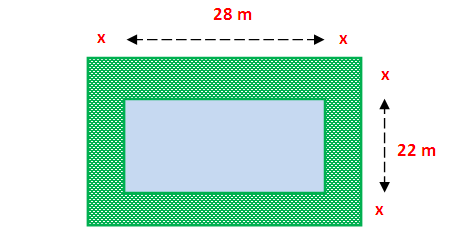 Length of the larger rectangle :

Width of the larger rectangle :

Dividing the entire equation by 4, we get

Negative value is not possible. Because x represents width of the path.

Therefore width of the path is 5 m

After having gone through the stuff given above, we hope that the students would have understood how to solve word problems involving the shapes square and rectangles.