We can use one of the following methods to solve a system of linear equations.

In the given two equations, y-term has the same coefficient and different signs. By adding the above two equations, we can eliminate y-term and solve for y.

Subtract 3 from each side.

Let's try to make the coefficients of y terms equal.

To make the coefficients of y terms equal, we have to find the least common multiple 4 and 3.

Now, we can add the two equations and eliminate y as shown below.

Subtract 17 from each side.

Add 5y to each side.

Solve the following system of equations by graphing.

Let us re-write the given equations in slope-intercept form  (y = mx + b).

Based on slope and y-intercept, we can graph the given equations. 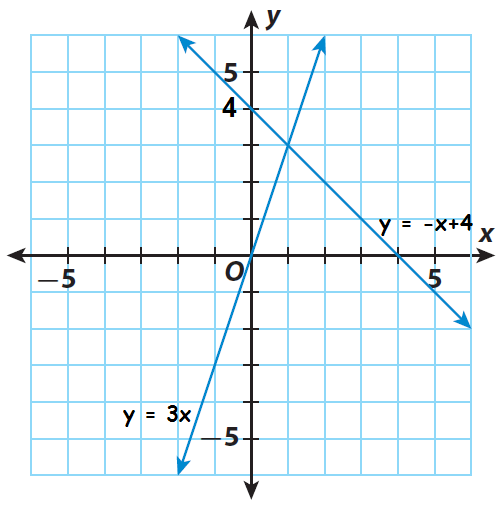 Find the point of intersection of the two lines. It appears to be (1, 3). Substitute to check if it is a solution of both equations.

Because the point (1, 3) satisfies both the equations, the solution for the given system is (1, 3).