Every right triangle has one right angle, two acute angles, one hypotenuse, and two legs.

(ii)  One side length and one acute angle measure.

We can use the side lengths of a right triangle to find trigonometric ratios for the acute angles of the triangle.

In this section, we will learn how to find the measure of the angle using calculator, if we know the trigonometric ratios : the sine, the cosine or the tangent of an acute angle.

In general, for an acute angle A :

Use trigonometric ratios to find the sine, the cosine, and the tangent of ∠A. Express the ratios in decimal form.

Make sure your calculator is in degree mode. Then use each of the trigonometric ratios you found in Step 2 to approximate the measure of ∠A to the nearest tenth of a degree.

Use a protractor to measure ∠A. How does the measured value compare with your calculated values?

Solve the right triangle shown below and round decimals to the nearest tenth.

Begin by using the Pythagorean Theorem to find the length of the hypotenuse.

Use calculator to approximate.

Now, use a calculator to find the measure of ∠B :

Finally, because ∠A and ∠B are complements, we can write

Solve the right triangle shown below and round decimals to the nearest tenth.

Use trigonometric ratios to find the values of g and h. 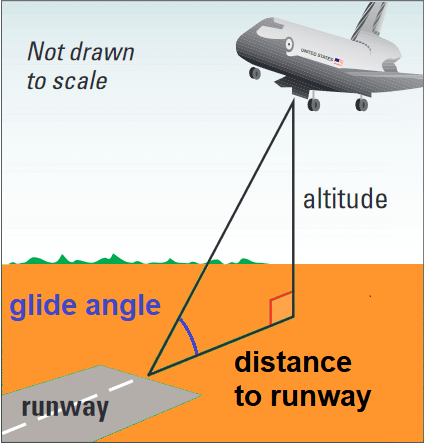 (i) When the shuttle’s altitude is about 15.7 miles, its horizontal distance to the runway is about 59 miles. What is its glide angle ? Round the answer to the nearest tenth.

(ii)  When the space shuttle is 5 miles from the runway, its glide angle is about 19°. Find the shuttle’s altitude at this point in its descent. Round the answer to the nearest tenth.

Sketch a right triangle to model the situation. Let x° be the measure of the shuttle’s glide angle.

We can use the tangent ratio and a calculator to find the approximate value of x.

Sketch a right triangle to model the situation. Let h be the altitude of the shuttle. We can use the tangent ratio and a calculator to find the approximate value of h.

Multiply each side by 5.

The shuttle’s altitude is about 1.7 miles.