Properties of numbers are

Let us see the above properties-of-numbers in detail

a) Addition of two integers is closed.

b) Multiplication of two rational numbers is closed.

For example let the rational numbers be ¾ and ½

Multiplication of ¾ and ½ is 3/8 which is again a rational number.

c) Addition of two odd numbers is not an odd number. So it is not closed.

For example, let us take 3 and 5 as the odd numbers. Addition of these two numbers is 3+5=8, which is not an odd number. So it is not closed.

a) Set : Set of all real numbers

If we multiply a real number by 1, then we will get the same. So 1 is the identity element under multiplication.

b) Set : Set of all whole numbers

As 0 is not an element of set of natural number, it is not closed under addition. But it is closed under multiplication.Because it has 1.

Apart from the above properties, let us see the remaining parts of them.

Important point : Identity element always has its own inverse.

Important point : Distributive and associative properties does not work for subtraction and division. 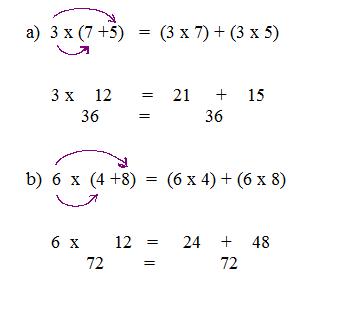 These are the properties of numbers which must be known by each and every student who is studying math.