Percentiles are the values which divide a given set of values into 100 equal parts.

The points of sub-divisions being

For unclassified data, formula to find pth percentile is given by

In case of grouped frequency distribution, we consider the following formula for computation of percentiles

l1  =  Lower class boundary of the percentile class. That is, the class containing percentile.

l2 being the upper class boundary of the percentile class.

Following are the wages of the laborers :

Arrange the wages in ascending order :

Formula to find percentile is

Find 9.02th value in the ascending order of wages : 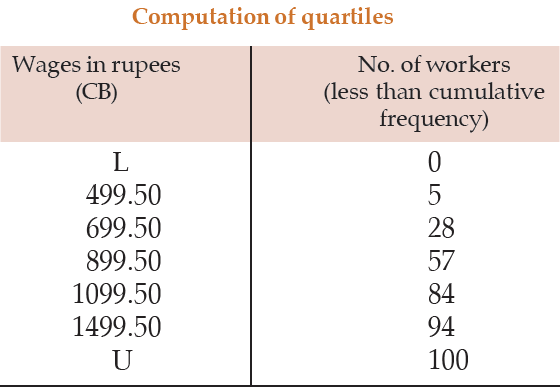 The formula to find percentile for grouped frequency distribution is

In the cumulative frequency table above, 23 comes between 5 and 28.

To find P23, substitute the above values in the formula.

After having gone through the stuff given above, we hope that the students would have understood percentiles.