MODELING SURFACE AREA OF A PRISM

The surface area of a three-dimensional figure is the sum of the areas of all its surfaces. You know how to use the net of a figure to find its surface area. Now you will discover a formula that you can use. 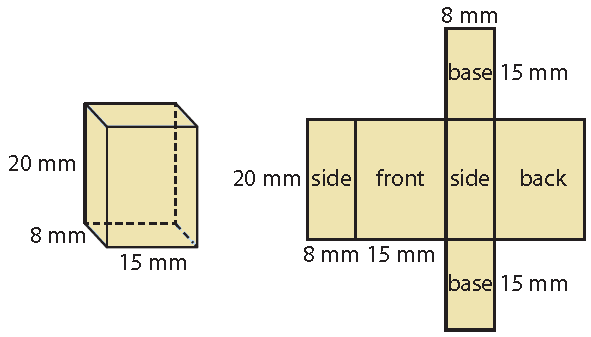 A. The lateral area L of a prism is the area of all faces except the bases.

C. The total area of the bases is sum of the areas of two bases (top and bottom).

D. The surface area S of the prism is the sum of the lateral area L and the total area of the bases,

1. Analyze Relationships Use the net above to answer this question :

How does the product of the perimeter P of the base of the prism and the height h of the prism compare to the lateral area L ?

2. Critical Thinking How can you express the surface area S of the prism in terms of P, h, and B? Use your answer to Question 1.