What is the smallest number by which 256 may be divided so that the quotient is perfect cube ?

The perimeter of a rectangle is 52 cm. If its width is 2 cm more than one-third of its length, find the dimensions of rectangle.

(A) Supplementary    (B) Complementary (C) None of these

In triangle ABC is inscribed in a circle with center O and BC is a diameter, if angle BAC is 50°, find angle ABC. 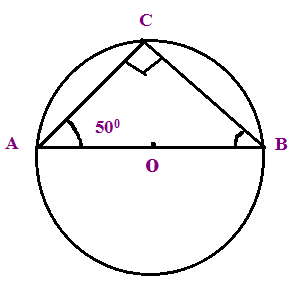 The volume of a right circular cylinder is 1100 cm3 and the radius of its base is 5 cm. Calculate its curved surface area.