Production of tomatoes this year :

Production of raspberries this year :

By percentage the total yield, by weight, of Boyd’s garden declined :

The correct answer is (A).

What is the minimum value of the function graphed on the xy-plane above, for -4 ≤ x ≤ 6?

The correct answer is (C).

A high school developed a program called Propel, which  offers extra guidance and support during the 9th-grade year. Before the school year began, 327 rising 9th graders were selected at random to participate in a study; 109 of those students were randomly assigned to enroll in the Propel program and the remaining students served as a control group. A summary of the year-end grade point averages (GPA) for the 327 9th-grade students who were chosen for the study is shown in the table below.

Given : Of the students enrolled in the Propel program, the ratio of boys to girls is approximately 2 : 3.

no. of boys enrolled in Propel : 2x

no. of girls enrolled in Propel : 3x

Number of girls enrolled in Propel :

The correct answer is (B).

Let x be the length of each side of the square.

Since the metal rods are of equal length,

To know the length of each rod, substitute 6 for x either in the perimeter of square or triangle.

The correct answer is (C). 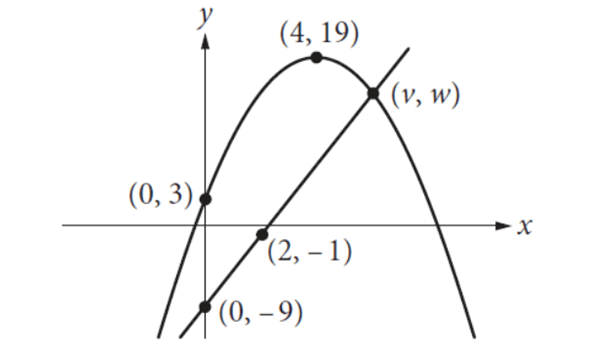 Find the equation of the parabola :

Vertex form equation of a parabola :

In the above graph, the parabola is passing through the point (0, 3). Then,

Equation of the parabola :

Find the equation of the line :

Slope of the line :

Equation of the line in slope-intercept form :

Solve (1) and (2) to get the x-coordinate at the point of intersection of the parabola and line.

(v, w) is the point of intersection of the parabola and line. As (v, w) is on the positive side of x-axis, v (x-coordinate) has to be positive.