The perimeter of the rhombus is 20 cm. One of the diagonals is of length 8 cm. Find the length of the other diagonal.

Jerry and Silvia wanted to go from the southwest corner of a square field to the northeast corner. Jerry walked due east and then due north to reach the goal, but Silvia headed northeast and reached the goal walking in a straight line. How much shorter Silvia's trip was, compared to Jerry's trip?

Which of the following statement represents this Venn diagram? 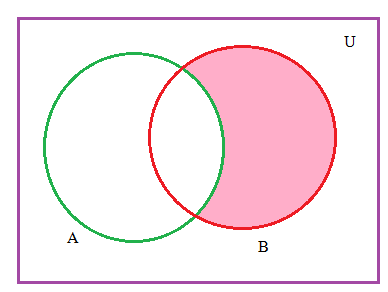 The point of concurrence of the angle bisector of a triangle is called the _____________ of the triangle.

The angles are supplementary and larger angle is twice the smaller angle.Find the angles.

Find the distance between the points