Represent the following sentence as number

Fill the blank with suitable number.

Two boys run on a circular track. They start at the same time. They take 12 minutes and 10 minutes respectively to go round once. Find at what time they will run together? 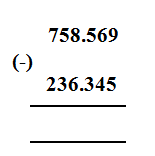 A fruit merchant bought mangoes in bulk. He sold 5/8 of mangoes. 1/16 of the mangoes were spoiled. 300 mangoes remained with him. How many mangoes did he buy ?

The ratio of the number of kilometers traveled by a car to the number of liter of petrol consumed by it is 9:1. If the car travels 108 km.Then how much petrol wold it consume ?

8 workers can build a wall in 12 days. How much days will 15 workers take to build the same wall?