In this problem what is 28 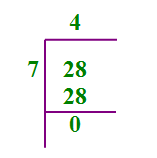 Which of the following equals 20 ?

(A) the emerald necklace

(B) the ruby bracelet

The product of 2 numbers is 20 and their difference is to be 1. What are the two numbers ?

Which of the following clocks shows the time 11:10 ?

If the side of the square is 4 cm then what will be its perimeter ?