WRITING FRACTIONS AS DECIMALS AND PERCENTS

Writing Fractions as Decimals and Percents :

In this section, we will learn, how to write a fraction as a decimal and a percent.

96 out of 200 animals treated by a veterinarian are horses.

Write an equivalent fraction with a denominator of 100.

Because, if we divide a number by 100, in the result there should two digits after the decimal point.

That is, the given number is compared to hundred.

1/8 of the animals treated by the veterinarian are dogs.

Notice that the denominator is not a factor or multiple of 100.

Use long division to divide the numerator by the denominator. 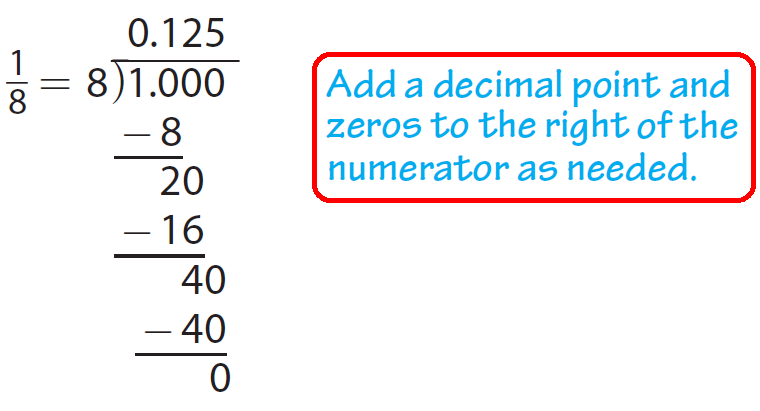 Now, let us write the decimal as a percent.

First write the fraction equivalent of the decimal.

In 0.125, since there are three digits after the decimal point, we can write it as a fraction with denominator 1000.

That is, the given number to be written as a fraction with denominator 100.

After having gone through the stuff given above, we hope that the students would have understood, how to write a fraction as decimal and a percent.

Apart from the stuff given in this section, if you need any other tuff in math, please use our google custom search here.