WORD PROBLEMS ON SIMILARITY OF TRIANGLE

In the adjacent figure, triangle ABC is right angled at C and DE ⊥ AB . Prove that ΔABC ∼ ΔADE and hence find the lengths of AE and DE.

In triangles ABC and EAD

So, the triangles ABC and EAD are similar.

Since the triangles ACB and APQ are similar.

By ASA, the above triangles are similar.

By ASA, the above triangles are similar.

Let us join OR,

Since the ratio of area of two similar triangles is equal to the ratio of the squares of any two corresponding sides, we have

Two vertical poles of heights 6 m and 3 m are erected above a horizontal ground AC. Find the value of y. 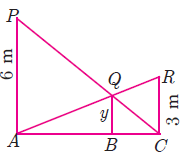