This is the continuity of our web content given on "Word problems on Percentage".

Before we look at the problems, if you want to know the shortcuts required for solving percentage problems,

Let us see, how 120 books are sold in different prices. 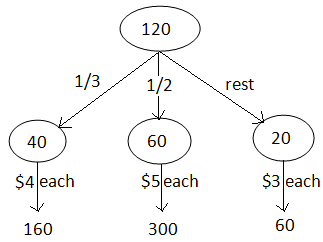 From the above picture,

Hence, the profit percentage is 44.44

A trader marks his goods 20% above the cost price and allows a discount of 10% for cash. Find the profit percentage

Let the selling price be x.

From the above picture, we get

Therefore, the selling price is $108.

Hence, the profit percentage is 8.

A person wants to get 20% profit after selling his object at 20% discount. Find the required percentage increase in marked price.

Let the marked price be x.

From the above picture, we get

Hence, the required percentage increase is 50.

So there is loss.

Hence, the loss percentage is 4.

The selling price of 10 articles is the cost price of 15 articles. Find profit or loss percentage.

So, there is profit.

After having gone through the stuff given above, we hope that the students would have understood, how to solve word problems on percentage.