A lamp-post stands at the centre of a circular park. Let P and Q be two points on the boundary such that PQ subtends an angle 90°  at the foot of the lamp-post and the angle of elevation of the top of the lamp post from P is 30° . If PQ = 30 m, then find the height of the lamp post. 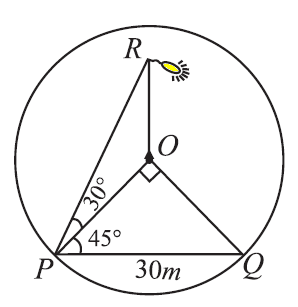 Let O be the centre of the park and OR be the lamp post. P and Q are two points on the boundary of the circular park. Given that PQ = 30m,

In a triangle RPO

A person in an helicopter flying at a height of 700 m, observes two objects lying opposite to each other on either bank of a river. The angles of depression of the objects are 30° and 45°. Find the width of the river. (√3 = 1.732 ) 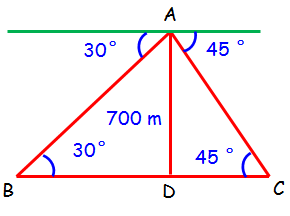 In triangle ACD, we need to find the length of DC.

In triangle ABD, we need to find the length of BD.

A person X standing on a horizontal plane, observes a bird flying at a distance of 100 m from him at an angle of  elevation of 30°. Another person Y standing on the roof of a 20 m high building, observes the bird at the same time at an angle of elevation of 45°. If X and Y are on the opposite sides of the bird, then find the distance of the bird from Y. 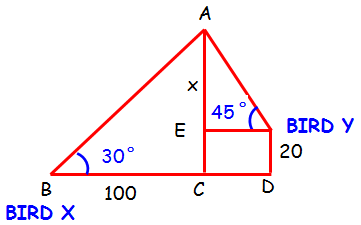 sin θ = opposite side/Hypotenuse side