VOLUME OF PRISMS AND CYLINDERS

The volume of a solid is the number of cubic units contained in its interior.

Volume is measured in cubic units, such as cubic meters (m3).

The volume of a cube is the cube of the length of its side.

If two polyhedra are congruent, then they have the same volume.

The volume of a solid is the sum of the volumes of all its non-overlapping parts.

Finding the Volume of a Rectangular Prism

The box shown below is 5 units long, 3 units wide, and 4 units high. How many unit cubes will fit in the box ? What is the volume of the box ? 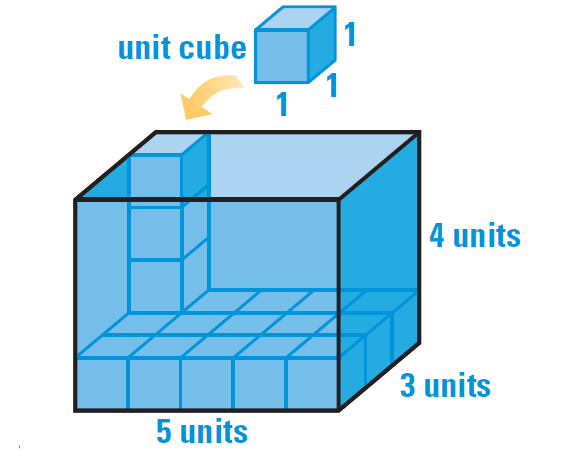 Because the box is completely filled by the 60 cubes and each cube has a volume of 1 cubic unit, it follows that the volume of the box is 60 • 1, or 60 cubic units.

The above Theorem is named after mathematician Bonaventura Cavalieri (1598–1647). To see how it can be applied, consider the solids below.

All three have cross sections with equal areas, B, and all three have equal heights, h. By Cavalieri’s Principle, it follows that each solid has the same volume.

The volume V of a prism is

where B is the area of a base and h is the height.

Theorem 2 (Volume of a Cylinder) :

The volume V of a prism is

where B is the area of a base, h is the height, and r is the radius of a base.

Find the volume of the right prism shown below.

The area of the base is

Formula for volume of a right prism is

So, the volume of the right prism is 12 cubic cm.

Find the volume of the right cylinder shown below.

Formula for volume of a right cylinder is

So, the volume of the right cylinder is about 1206.37 cubic inches.

If a concrete weighs 145 pounds per cubic foot, find the weight of the concrete block shown below. 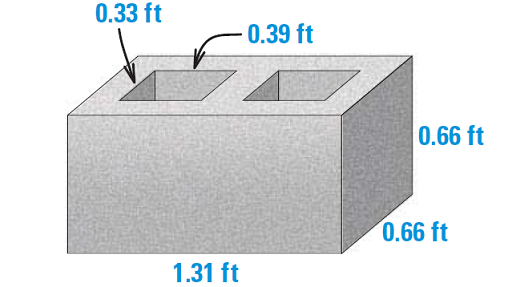 To find the weight of the concrete block shown, we need to find its volume.

The area of the base can be found as follows :

So, the weight of the concrete block is about 58 pounds.