A rate is a comparison of two quantities that have different units.

Let us look at some examples to understand how unit rated can be used to make comparison.

In both the jobs, wages are given for different hours. To compare the two jobs, we have to convert the wages into unit rates.

That is, we have to find the wages for 1 hour.

When we compare the unit rates of both the jobs, Lily gets $1 more in the first job.

So, the first job is preferable.

Lily is at the grocery store comparing two brands of juice. Brand A costs $3.84 for a 16-ounce bottle. Brand B costs $4.50 for a 25-ounce bottle. Which brand is the better buy ?

To compare the costs, Lily must compare prices for equal amounts of juice.

That is, she has to compare prices of one ounce of each juice.

We can get the price of 1 ounce of each juice as given below. 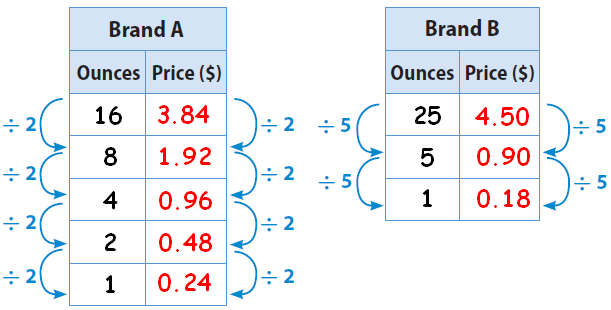 From the above tables,

When we compare the unit prices of the two brands given above, it is better to buy brand B.

Michael drives 600 miles in 8 hours and Alex drives 380 miles in 5 hours. Who is driving faster ?

Distance covered by Michael in 1 hour is

Distance covered by Alex in 1 hour is

When we compare the above unit rates (Distance covered in 1 hour), Alex is driving faster than David.