Trigonometry is the branch of mathematics that studies the relationships involving lengths of sides and measures of angles of triangles.

It is a useful tool for engineers, scientists, and surveyors and is applied even in seismology and navigation.

The angle AOB is a measure formed by two rays OA and OB sharing the common point O as shown below. 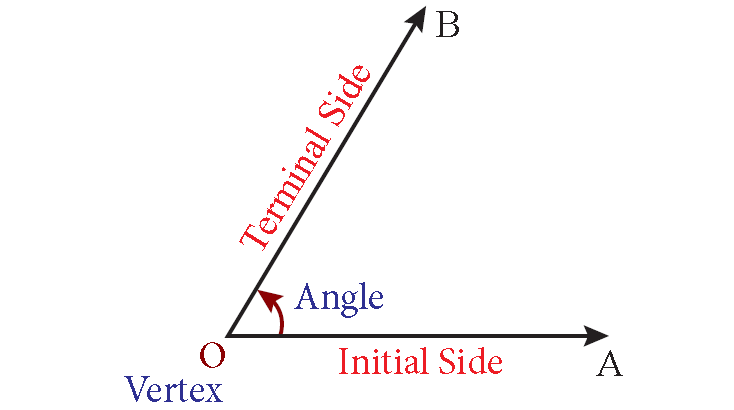 The common point O is called the vertex of the angle.

If we rotate the ray OA about its vertex O and takes the position OB, then OA and OB respectively are called the initial side and the terminal side of the angle produced.

One full anticlockwise (or clockwise) rotation of OA back to itself is called one complete rotation or revolution.

The degree is a unit of measurement of angles and is represented by the symbol °.

We shall classify a pair of angles in the following way for better understanding and usages.

(i) Two angles that have the exact same measure are called congruent angles.

(ii) Two angles that have their measures adding to 90° are called complementary angles.

(iii) Two angles that have their measures adding to 180° are called supplementary angles.

An angle is said to be in standard position, if its vertex is at the origin and its initial side is along the positive x-axis. 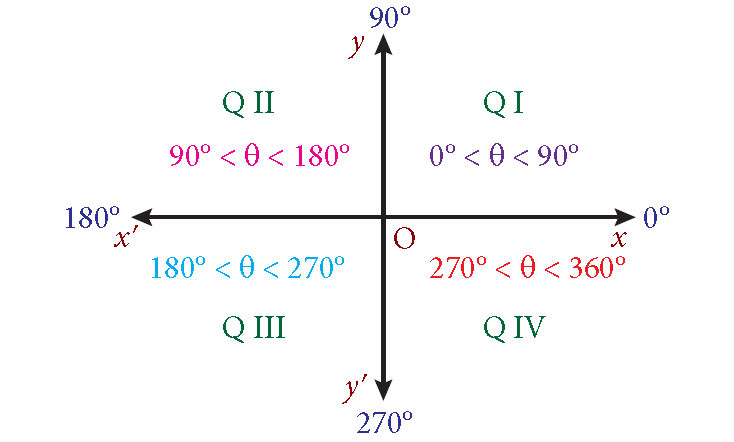 Angles in standard position having their terminal sides along the x-axis or y-axis are called quadrantal angles.

By continuing the anticlockwise rotation, angles larger than 360° can be produced.

If we rotate in clockwise direction, negative angles are produced.

Angles 57°, 417° and −303° have the same initial side and terminal side but with different amount of rotations, such angles are called coterminal angles. 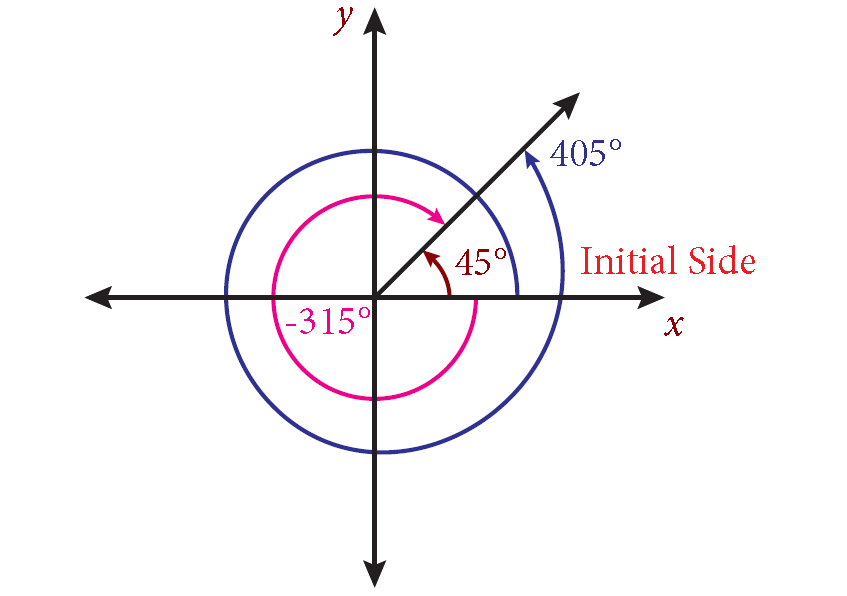 The measurements of coterminal angles differ by an integral multiple of 360°.

Relationship between Degree and Radian Measures

We have degree and radian units to measure angles. One measuring unit is better than another if it can be defined in a simpler and more intuitive way.

For example, in measuring temperature, Celsius unit is better than Fahrenheit as Celsius was defined using 0° and 100° for freezing and boiling points of water.

Greek Mathematicians observed the relation of π which arises from circumference of a circle and thus, π plays a crucial role in radian measure.

Thus, we have the following relations :

Observe that the scale used in radians is much smaller than the scale in degrees. The smaller scale makes the graphs of trigonometric functions more visible and usable. The above relation gives a way to convert radians into degrees or degrees into radians.