There are three different systems for measuring angles.

(i) Sexagesimal System or British System :

The symbols 1°, 1' and 1" are used to denote a degree, a minute and a second respectively.

The symbol 1g is used to denote a grade.

(i) It is clear that minutes and seconds in sexagesimal and centesimal systems are different.

In the circular system , the radian measure of an angle is introduced using arc lengths in a circle of radius r. Circular system is used in all branches of Mathematics and in other applications in Science.

The symbol 1c is used to denote 1 radian measure. 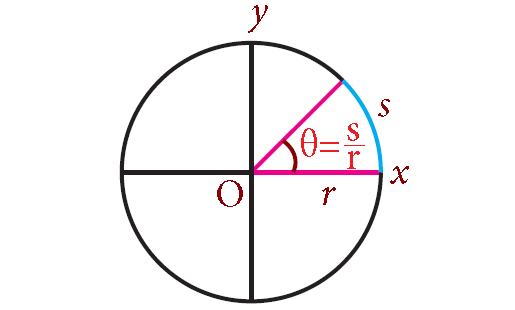 Relationship between Degree and Radian Measures

We have degree and radian units to measure angles. One measuring unit is better than another if it can be defined in a simpler and more intuitive way.

For example, in measuring temperature, Celsius unit is better than Fahrenheit as Celsius was defined using 0° and 100° for freezing and boiling points of water.

Greek Mathematicians observed the relation of π which arises from circumference of a circle and thus, π plays a crucial role in radian measure.

Thus, we have the following relations :

Observe that the scale used in radians is much smaller than the scale in degrees. The smaller scale makes the graphs of trigonometric functions more visible and usable. The above relation gives a way to convert radians into degrees or degrees into radians.