SURFACE AREA OF PYRAMIDS AND CONES

Finding the Surface Area of a Pyramid

A regular hexagonal pyramid and its net are shown below. Let b represent the length of a base edge, and let l represent the slant height of the pyramid. 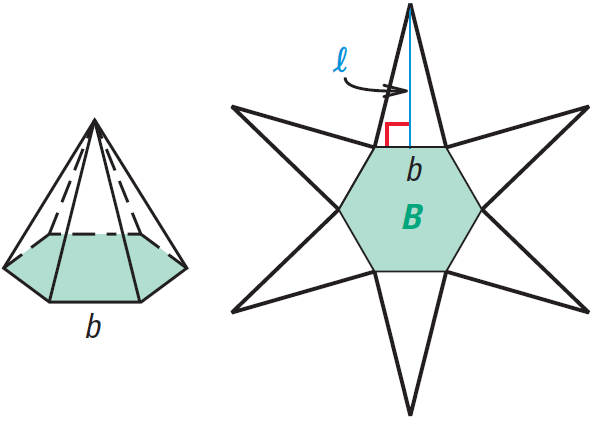 The area of each lateral face is

and the perimeter of the base is

So, the surface area is a s follows :

Substitute P for 6b.

Surface Area of a Regular Pyramid

The surface area S of a regular pyramid is

Finding the Surface Area of a Cone

A circular cone or cone has a circular base and a vertex that is not in the same plane as the base. The altitude, or height, is the perpendicular distance between the vertex and the base.

In a right cone shown below, the height meets the base at its center and the slant height is the distance between the vertex and a point on the base edge. 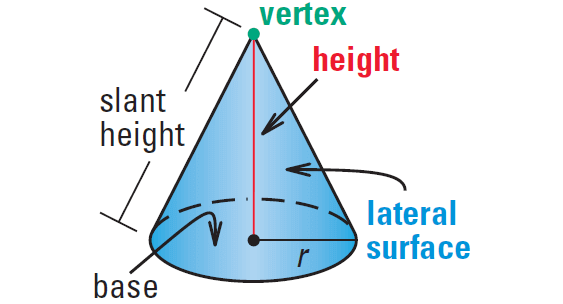 The lateral surface of a cone consists of all segments that connect the vertex with points on the base edge. When we cut along the slant height and lie the cone flat, we get the net shown below. 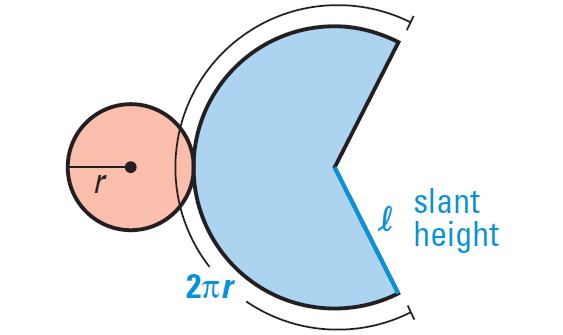 In the net, the circular base has an area of πr2 and the lateral surface is the sector of a circle. We can find the area of this sector by using a proportion, as shown below.

Multiply each side by πl2.

The surface area of a cone is the sum of the base area and the lateral area, πrl.

The surface area S of a right cone is

where r is the radius of the base and l is the slant height.