STATISTICS PROBLEMS WITH SOLUTIONS FOR GRADE 10

Statistics Problems with Solutions for Grade 10 :

Here we are going to see, some example problems in the topic statistics.

Statistics Problems with Solutions for Grade 10

The frequency distribution is given below.

In the table, k is a positive integer, has a variance of 160. Determine the value of k.

The standard deviation of some temperature data in degree celsius (oC) is 5. If the data were converted into degree Farenheit (oF) then what is the variance? 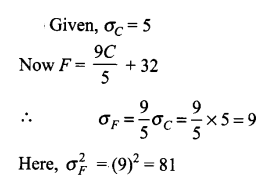 Prices of peanut packets in various places of two cities are given below. In which city, prices were more stable?

By finding the coefficient of variation, we come to know that which is more stable.

Hence in city A, prices are more stable.

If the range and coefficient of range of the data are 20 and 0.2 respectively, then find the largest and smallest values of the data.

By applying the value of L, we get

Hence the largest and smallest values are 60 and 40 respectively.

After having gone through the stuff given above, we hope that the students would have understood, "Statistics Problems with Solutions for Grade 10".

Apart from the stuff given in this section "Statistics Problems with Solutions for Grade 10" if you need any other stuff in math, please use our google custom search here.