Half the perimeter of a rectangular garden, whose length is 4 m more its width is 36 m. Find the dimensions of the garden.

Let "x" be the width of the rectangular garden

Let "y" be its length

Half the perimeter of the rectangular garden = 36 m

Now let us find x and y intercepts to draw the graph. 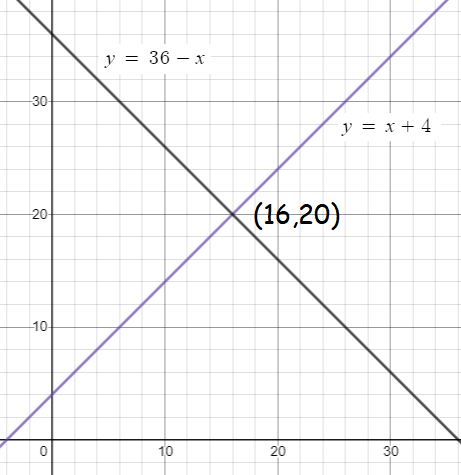 According to the above condition, we have to form an equation.

The values of a₂,b₂ and c₂ be any real values but the simplified values of a₁/a₂ and b₁/b₂ shouldn't be equal.

So,  one of the required possible equation is

The condition  for two parallel lines is a₁/a₂ = b₁/b₂ ≠ c₁/c₂. According to the above condition, we have to form a equation.

So one of the required possible equation is

So one of the required possible  equation is