In this section, you will learn how to solve word problems using Cramer's rule.

Let us consider the following system of three equations with three unknowns x, y and z.

Now, we can write the the following determinants using the above equations. 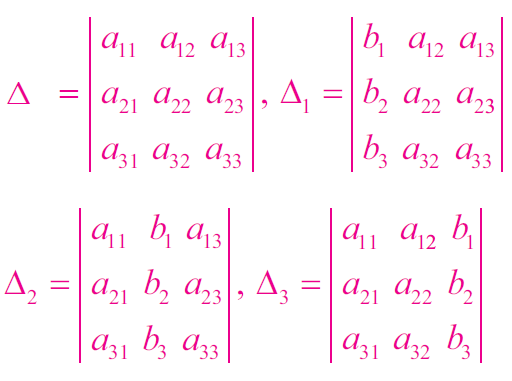 Then, Cramer’s rule to find the values of x, y and z :

If Δ  =  0, the system is inconsistent and it has solution.

In a competitive examination, one mark is awarded for every correct answer while 1/4 mark is deducted for every wrong answer. A student answered 100 questions and got 80 marks. How many questions did he answer correctly ? (Use Cramer’s rule to solve the problem).

Let "x" and "y" be the number of questions answered correctly and incorrectly respectively.

So, the number of questions answered correctly is 84 and wrongly is 16.

Let "x" and "y" be the quantity of 1st and second solution.

A fish tank can be filled in 10 minutes using both pumps A and B simultaneously. However, pump B can pump water in or out at the same rate. If pump B is inadvertently run in reverse, then the tank will be filled in 30 minutes. How long would it take each pump to fill the tank by itself ? (Use Cramer’s rule to solve the problem).

Let "x" be the number of minutes taken by sump A to fill the tank.

Let "y" be the number of minutes taken by sump B to fill the tank.

A alone can fill in 15 mins

B alone can fill in 30 mins

So, the amount is enough to pay the bill.