Here we are going to see an example problem on the topic mensuration.

The barrel of a fountain-pen cylindrical in shape, is 7 cm long and 5 mm in diameter. A full barrel of ink in the pen will be used for writing 330 words on an average. How many words can be written using a bottle of ink containing one fifth of a litre?

To find the number of words can be written using a bottle of inck, we have to find the quantity of ink in the barrel.

Volume of barrel in the cylindrical shape  =  πr2h

Volume of barrel in the cylindrical shape :

A hemi-spherical tank of radius 1.75 m is full of water. It is connected with a pipe which empties the tank at the rate of 7 litre per second. How much time will it take to empty the tank completely?

To solve this problem, first let us find quantity of water in the tank in liters.

Find the maximum volume of a cone that can be carved out of a solid hemisphere of radius r units. 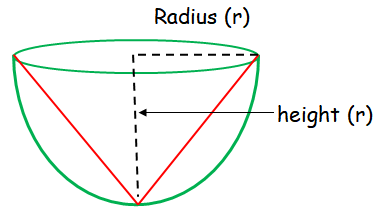 Volume of cone craved out from the hemisphere

After having gone through the stuff given above, we hope that the students would have understood, "Solid Mensuration Practice Problems".

Apart from the stuff given in this section "Solid Mensuration Practice Problems", if you need any other stuff in math, please use our google custom search here.