In this section, we will learn about sequences and series. 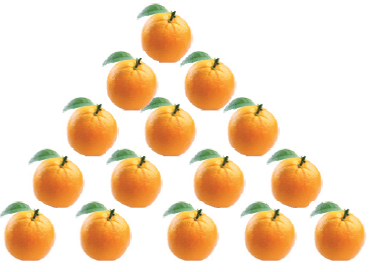 The number of apples in each row are

These numbers are belongs to the category called sequences.

The real valued sequence is a function defined on the set of natural numbers and taking real values.

What is finite and infinite sequence ?

If the number of elements in a sequence is finite then it is called a finite sequence.

If the number of elements in a sequence is infinite then it is called a infinite sequence.

A few popular sequences in math are:

The sum of the terms of a sequence is called series.

Then the real number

is defined as a series of real number.

There are some series whose sum can be expressed by explicit formulae. Such series are called special series.

After having gone through the stuff given above, we hope that the students would have understood sequences and series.