About "Segment Lengths in Circles"

In this section, we will learn about the relationships that segments in circles have with each other. By definition, a segment is a part of a line. There are several different types of segments that we can have when it comes to circles.

Finding Lengths of Segments of Chords

When two chords intersect in the interior of a circle, each chord is divided into two segments which are called segments of a chord.  The following theorem gives a relationship between the lengths of the four segments that are formed.

In the diagram, we have

Proof of the above Theorem :

We can use similar triangles to prove the Theorem.

Given : AB, CD are chords that intersect at E.

So, the lengths of corresponding sides are proportional.

Chords ST and PQ intersect inside the circle.  Find the value of x.

Using the above Theorem, we have

Using Segments of Tangents and Secants

In the diagram shown below, PS is called a tangent segment because it is tangent to the circle at an endpoint.  Similarly, PR is a secant segment and PQ is the external segment of PR.

Find the value of x in the diagram shown below.

Subtract 100 from each side.

Find the value of x in the diagram shown below. 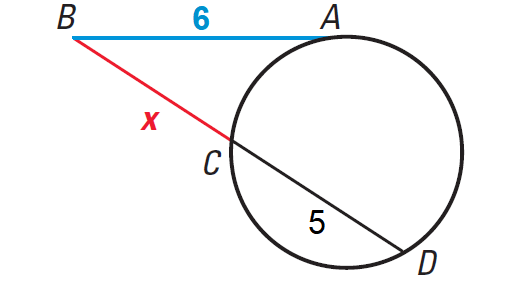 Subtract 36 from each side.

We can use only positive value for x. because lengths cannot be negative.

Estimating the Radius of a Circle

You are standing at point C,  about 8 feet from a circular aquarium tank.  The distance from you to a point of tangency on the tank is about 20 feet.  Estimate the radius of the tank. 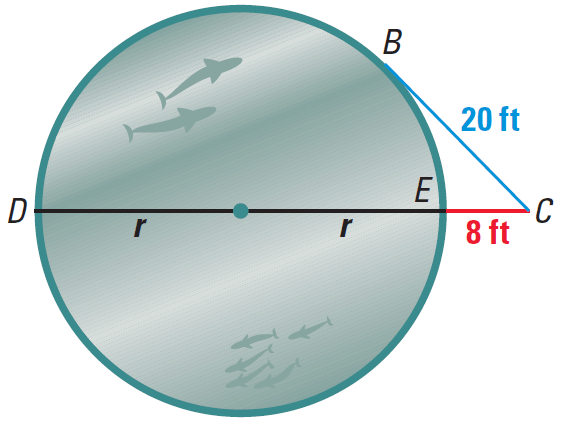 Subtract 64 from each side.

Hence, the radius of the tank is about 21 feet.

After having gone through the stuff given above, we hope that the students would have understood, "Segment Lengths in Circles".