In this section, you will learn how to find remainder when 17 power 23 is divided by 16. 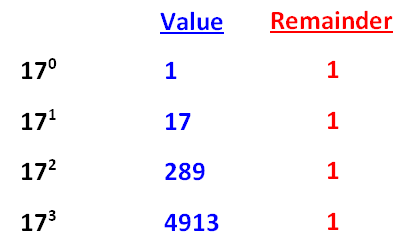 When we look at the above table carefully, 170 is divided by 16, the remainder is 1.

Again we get remainder 1 for the exponent 1.

Next we get remainder 1 for the exponent 2 and so on.

So, we get remainder 1, for all the exponents we take for 17.