We can use the following matrices to get different types of reflections.

Reflection about the x-axis Reflection about the y-axis 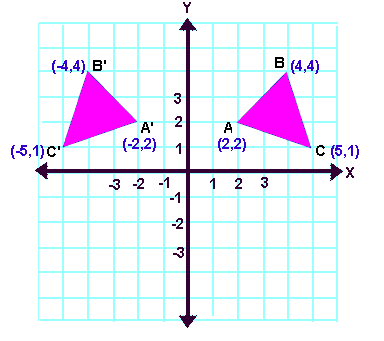 Reflection about the line y = x Let us consider the following example to have better understanding of reflection.

First we have to write the vertices of the given triangle ABC  in matrix form as given below.

Since the triangle ABC is reflected about x-axis, to get the reflected image, we have to multiply the above matrix by  the matrix given below. 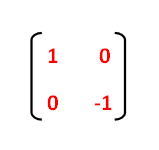 Now we  can get vertices of the reflected image A'B'C' from the resultant matrix.

Vertices of the reflected image are

After having gone through the example given above, we hope that the students would have understood the way in which they have to find the vertices of the reflected image using matrices.

Reflecting over Any Line

When we look at the above figure, it is very clear that each point of a reflected image A'B'C' is at the same distance from the line of reflection as the corresponding point of the original figure.

In other words, the line x = -2 (line of reflection) lies directly in the middle between the original figure and its image.

And also, the line x = -2 (line of reflection) is the perpendicular bisector of the segment joining any point to its image.

Students can keep this idea in mind when they are working with lines of reflections which are neither the x-axis nor the y-axis.

Apart from the stuff given in this section, if you need any other stuff, please use our google custom search here.