The best measure of dispersion is, usually, standard- deviation which does not possess the demerits of range and mean deviation.

SD for a given set of observations is defined as the root mean square deviation when the deviations are taken from the AM of the observations.

Then, the formula for SD is given by

For a grouped frequency distribution, the SD is given by

1)  If all the observations assumed by a variable are constant i.e. equal, then the SD is zero. This means that if all the values taken by a variable x is k, say , then s = 0. This result applies to range as well as mean deviation.

3)  If there are two groups containing n₁ and n₂ observations, x̄₁ and x̄₂ as respective arithmetic means, S₁ and S₂ as respective standard deviations, then combined SD is given by 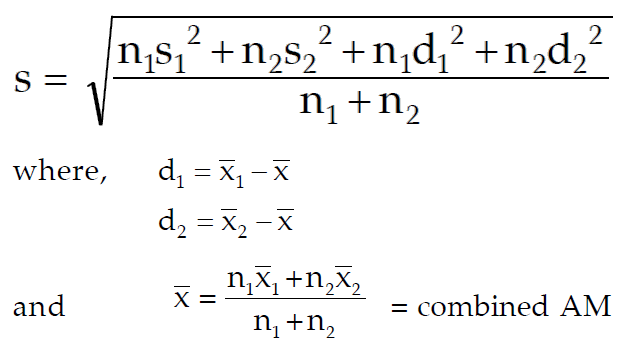 Calculate the standard deviation of the first 13 natural numbers.

Calculate the standard deviation of the following data

First, we have to write the given data in the ascending order.

Since the given numbers are small we can use direct method to find standard deviation.