[Two vectors are parallel in the same direction then θ = 0]

[Two vectors are parallel in the opposite direction θ = π/2

That is a vector ⋅ b vector is

When is a scalar/dot product of two vectors equal to zero ?

If the dot product of two nonzero vectors is zero, then the vectors are perpendicular.

For any two non-zero vectors a vector and b vector, a ⋅ b = 0 a vector is perpendicular to b vector.

Different ways of representations of a vector ⋅ b vector

These representations are essential while solving problems 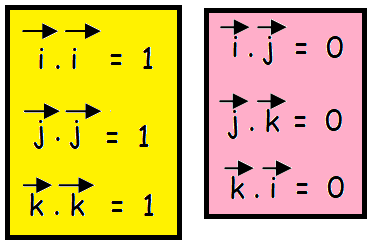 For any two scalars λ and μ

These can be extended to any number of vectors

Hence, the scalar product of two vectors is equal to the sum of the products of their corresponding rectangular components.

For any two vectors and a vector b vector

If one of them is zero vector then the equality holds. So, let us assume that both are non-zero vectors.