PROBLEMS ON PIE CHART WITH SOLUTIONS 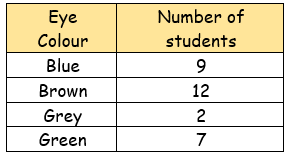 a) Illustrate these results on a pie chart.

b) What percentage of the group have: 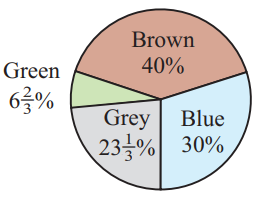 (ii)  Percentage of people who have blue or gray eyes

A business has a major store in five cities. We will call the stores A, B, C, D and E. The pie chart shows the proportion of sales for each store.

a) Use your protractor to measure the size of each sector angle.

b) If the total sales from all stores is $72 million, find the sales made by each of the stores. 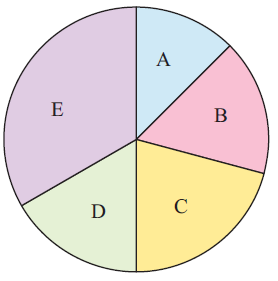 On a pie chart a sector has an angle of 30o and this represents 171 people.

a) How many people are represented by the whole chart?

b) How many people would be represented by a sector of size 72o ?

So, the whole chart represents 2052 people.

(b)  Area of sector with angle measure 72

A random sample of people are surveyed about their blood type. The results are displayed in the pie chart opposite.

a) Use your protractor to measure the size of each sector angle.

b) What percentage of people surveyed have type A blood?

c) If 7 of the people surveyed have type AB blood, how many people were surveyed in total? 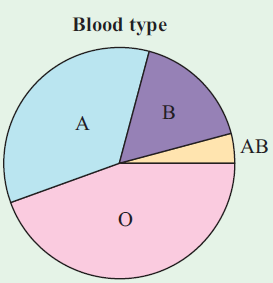 b)  Percentage of of people surveyed for type A :

Number of people surveyed is 168 people.