Following are the parts of a circle.

Center of a Circle

A circle is the set of all points in a plane that are equidistant from a given point, called the center of the circle. A circle with center P is called "circle P".

Radius of a Circle

The distance from the center to a point on the circle is the radius of the circle.

Two circles are congruent, if they have the same radius.

Diameter of a Circle

The distance across the circle, through its center, is the diameter of the circle.

The diameter is twice the radius.

The terms radius and diameter describe segments as well as measures.

A radius is a segment whose endpoints are the center of the circle and a point on the circle. QP, QR and QS are radii of "circle Q". All radii of a circle are congruent.

Chord of a Circle

A chord is a segment whose endpoints are points on the circle PS and PR are chords in the above diagram.

Diameter is also a chord that passes through the center of the circle. PR is the diameter in the above diagram.

Secant of a Circle

A secant is a line that intersects a circle in two points. Line j in the diagram below is a secant.

Tangent of a Circle

A tangent is a line in the plane of a circle that intersects the circle in exactly one point. Line k in the diagram above is a tangent.

The point where a tangent line touches the circle. Point m in the diagram above is the point of tangency.

Points of Intersection of Two Circles

In a plane, two circles may intersect in two points, one point, or no points.

Two circles can intersect in two points as shown below.

Coplanar circles that intersect in one point are called tangent circles. 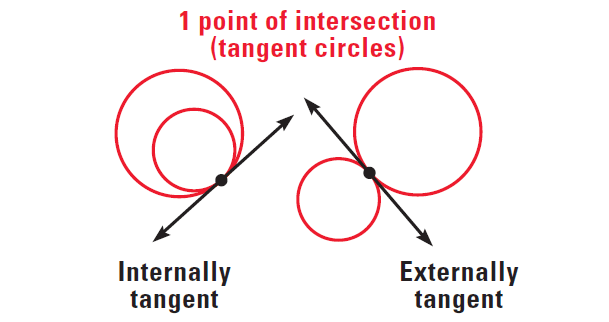 A line or segment that is tangent to two coplanar circles is called a common tangent.

A common internal tangent intersects the segment that joins the centers of the two circles.

A common external tangent does not intersect the segment that joins the centers of the two circles.

Coplanar circles that have a common center are called cocentric circles. 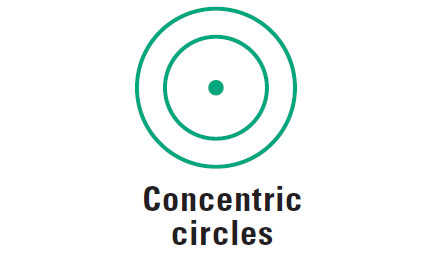 Tell whether the line or segment is best described as a chord, a secant, a tangent, a diameter, or a radius of "circle C". 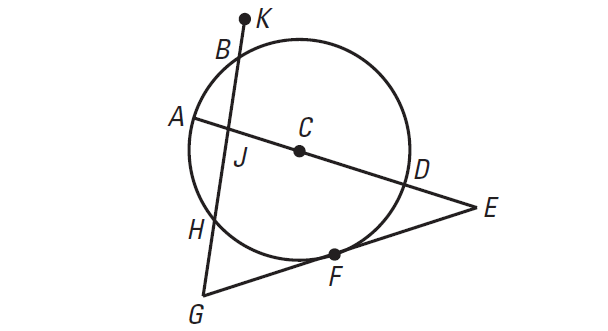 (i)  AD is a diameter, because it contains the center C.

(ii)  CD is a radius, because C is the center and D is a point on the circle.

(iii)  EG is a tangent, because it intersects the circle in one point.

(iv)  HB is a chord, because its endpoints are on the circle.