In this system the numbers wrap around 1 to 12. This type of wrapping around after hitting some value is called Modular Arithmetic.

1. The day and night change repeatedly.

2. The days of a week occur cyclically from Sunday to Saturday.

When we divide two integers, say 'X' and 'Y', we will have an equation that looks like the following :

X is the dividend

Y is the divisor

Q is the quotient

R is the remainder

Sometimes, we would be interested to know only the remainder when X is divided by Y.

For such cases, the operator called modulo (abbreviated as mod) will be used.

Using the same X, Y, Q and R as above, we can have

We say this as X modulo Y is equal to R, where Y is referred to as the modulus.

Observe what happens when a number is increased by one and divided by 4.

The remainder starts at 0 and it increases by 1 each time, until the number reaches one less than the number we are dividing by. After that, the sequence repeats.

Observing this, we can visualize the operator modulo using circles.

We write 0 at the top of the circle and continue clockwise writing integers 1, 2,........ up to one less than the modulus.

For example a clock with the 12 replaced by a 0 would be the circle for a modulus of 12. 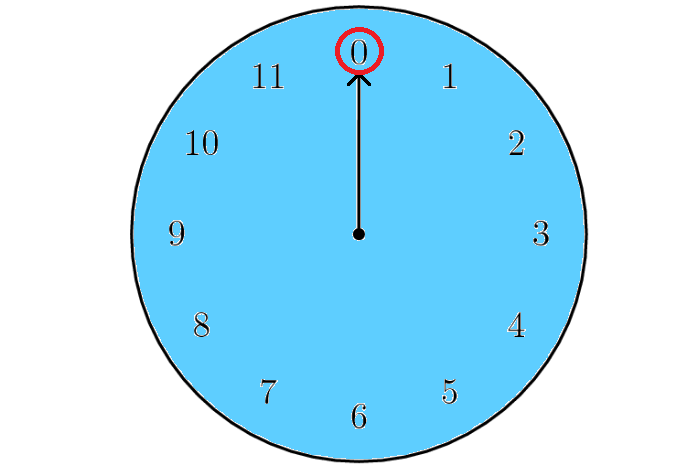 To find the result of X mod Y, we can do the following steps.

Construct this clock for size Y.

Start at 0 and move around the clock X steps.

Wherever we land is our solution.

Here, the dividend is -4 (negative number) and 4 is evenly divisible by the divisor 2.

Here, the dividend is -12 (negative number) and 12 is evenly divisible by the divisor 4.

Here, the dividend is -3 (negative number) and 3 is less than the divisor 5. Now, we have to find the number which comes after 3 that is evenly divisible by the divisor 5. That is 5.