For a given set of observation, MAD is defined as the arithmetic mean of the absolute deviations of the observations from an appropriate measure of central tendency.

Then the MAD of x is given by

For a grouped frequency distribution, MAD is given by

A relative measure of dispersion applying MAD is given by

MAD takes its minimum value when the deviations are taken from the median.

1)  MAD takes its minimum value when the deviations are taken from the median.

3)  It is rigidly defined

4) It is based on all the observations and not much affected by sampling fluctuations.

5)  It is difficult to comprehend and its computation

6) Furthermore, unlike SD, MAD does not possess mathematical properties.

What is the MAD for the following numbers?

The mean is given by 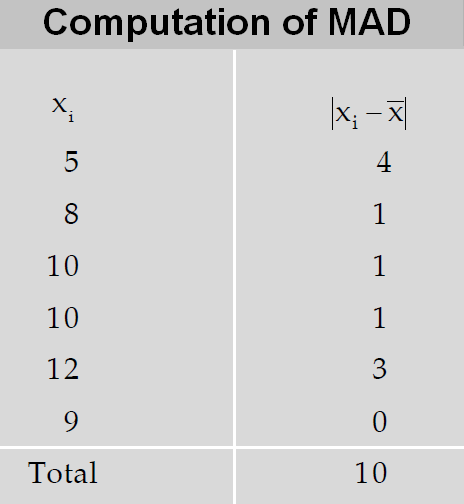 Thus MAD is given by

The data represent the height, in feet, of various buildings. Find the mean absolute deviation.

The mean is given by

Absolute deviations of observations from mean :

Calculate the MAD by finding the mean of the above absolute deviations of observations from mean.  Round to the nearest whole number.

After having gone through the stuff given above, we hope that the students would have understood mean absolute deviation.