MATH QUESTIONS AND ANSWERS FOR GRADE 7

The temperature at 12 noon was 10° C above zero.If it decreases at the rate of 2°C per hour until midnight, at what time would the temperature be 8°C below zero?

At 9 pm the temperature will be 8°C below zero.

An elevator decends into a mine shaft at the rate of 6 m/min.If the decline starts from 10 m above the ground level. Calculate how long will it take to reach -350 m ?

Starting position of mine shaft is 10 m above the ground but it moves in opposite direction.

The total distance covered by mine shaft

Now, time taken to cover a distance of 6 m by it

Thus, in one hour the mine shaft reaches –350 below the ground.

In order to find 28 km is how much less than 46.2 km, we have to perform subtraction.

Subtract both sides by 2

Divide both sides by 5

(B) Point of intersection

The meeting point of two lines is called the point of intersection.

Find the value of x in the following triangle 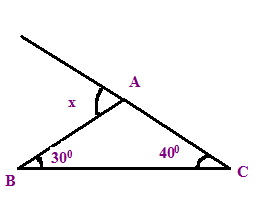 In a triangle, an exterior angle is equal to the sum of the interior opposite angles

Difference between old and new population

A wire is in the shape of square of side 10 cm. If the wire is rebent in to a rectangle length 12 cm, calculate its width.

Subtract both sides by 12

Hence the width of rectangle is 8 cm.

Two sides of a parallelogram ABCD are 6cm and 4cm. The height corresponding to the base of CD is 3 cm. Find the area of the parallelogram

Area of parallelogram  ABCD  =  Base ⋅ Height 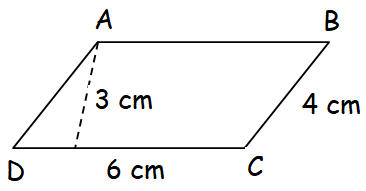 Diameter of a circular garden is 9.8 m. Calculate its area.