Originally, one of the integers in the real number system that is smaller than 1 but greater than -1. The only real number that is neither positive nor negative and also it indicates no quantity, size, or magnitude.

The property that states that the sum of a number and 0 is that same number.

The above property is true for all real values of k.

This property is sometimes called the identity property of addition.

The above property is true for all real values of k.

Any non zero number to the power of zero is equal to one.

The importance of the number zero goes beyond the real numbers because it serves as the additive identity also for the complex numbers: If z is any complex number, then

Also, zero could be considered as the ”zero function” that for all values of the variable x equals to zero. In this interpretation zero is also the additive identity in the set of all functions.

Also called zero product property. If for two numbers (real or complex) a and b,

This property of numbers is one of the most important tools in solving algebraic or trigonometric equations.

Factoring the polynomial on the left side by grouping, we get the equation

which by the zero factor property results in three linear equations

and again, by the zero factor property this results in two simpler equations

The zero factor property is not true for other mathematical object, for example for matrices : If the product A·B of two matrices is the zero matrix then none of the matrices A or B are necessarily the zero matrices themselves.

A matrix of arbitrary size mxn such that all of the entries are zeros. Example :

This matrix is the additive identity in the set of all matrices of the same size: Adding this matrix to any other matrix does not change it.

Zeros of the Equation :

Every polynomial equation of degree n ≥ 1 has exactly n zeros, if we accept complex zeros and count them according to multiplicity. See also Fundamental Theorem of Algebra.

The subspace of a vector space that consists of a single zero vector x = 0. Zero subspace is the part of any vector space.

The (linear) transformation between any vector spaces V and W such that T(u) = 0 for any vector u ∈ V.

The vector that has all zero components :

This vector plays the role of the additive unity for any vector space :

for any vector x of the vector space.

In three-dimensional Cartesian coordinate system, in addition to x- and y-axes, there is also the z-axis, that is perpendicular to the plane formed by these two axes. 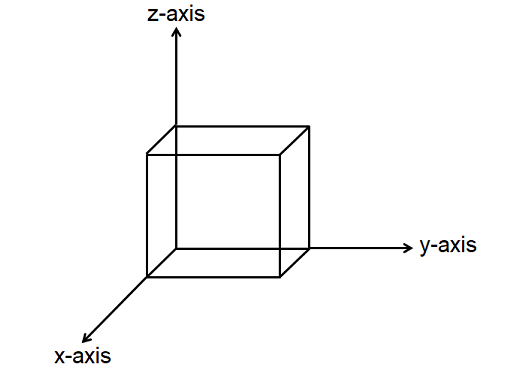 Suppose x is a random variable and assume x̄ is its mean and s its standard deviation. The quantity