We may consider the following words which start with the letter “V”.

A symbol that represent a quantity in an algebraic expression.

An element in vector space which has both magnitude and direction.

A vector space is set of vectors that can be linear combination or linearly merged. Vector space over the field F.

Venn diagrams or set diagrams that shows all possible logical relations between two or more sets.

In Geometry vertex is an angle point of any shape or angle. In graph theory vertex represents a node.

If two lines are intersecting then the angle formed by opposite are called as vertically opposite angle and it is equal. 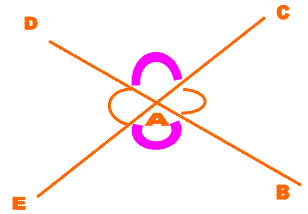 More words on math dictionary -V are as follows:

A horizontal line drawn as a part of a fraction or radical.

Total amount of space enclosed inside the solids.This is a quantity of measurement of space inside a three dimension closed surface.This is usually noted by the alphabet "V" and sometimes "Vol".

We update regularly the page Math Dictionary-V.  We welcome your valuable suggestions. Please use the box given below to express your opinion or suggestions.