Now, we can see some more details which our Dictionary of "u" gives for the above words which start the letter "u".

Math dictionary-u words are as follows:

A polygon with 11 sides 11 angles. It is also called us Hen decagon. Canadian dollar is in the shape of undecagon. 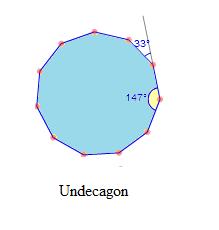 A term used without a specific mathematical definition.

The terms or conditions or sets which are not equal. It is denoted by '≠'.

Things or sets or objects which are same in size, design, so on.

A scale in which the numbers are uniformly placed.

For two sets A and B, the operation union is defined as,the set which are containing all the elements of set A and set B, without repeating elements.

The symbol for union is '∪'.

A standard quantity used in measurement. Example:An inch is a unit of length, pound is unit of weight so on.

Terms that involve different variables or same variables with different exponents. Example: 3, 3x, 4x², 5y⁴ all are unlike terms.

We will update regularly this page math dictionary-U.  We welcome your valuable suggestions. Please use the following box to express your suggestions.