The final question on a science test reads, how many hours we spent studying for this test. The teacher records the number of hours each student studied and the marks scored by the respective student on the test.

Marks Scored by the Students

Make a prediction about the relationship between the number of hours spent studying and marks scored.

When we look at the above data, we can make the following prediction. A greater number of study hours are likely to be associated with higher marks.

Moreover, if we consider hours spent for studying as variable "x" and marks scored by the students as variable "y", we can write the above data as ordered pairs in the form (x, y).

Plot these points on a graph paper. 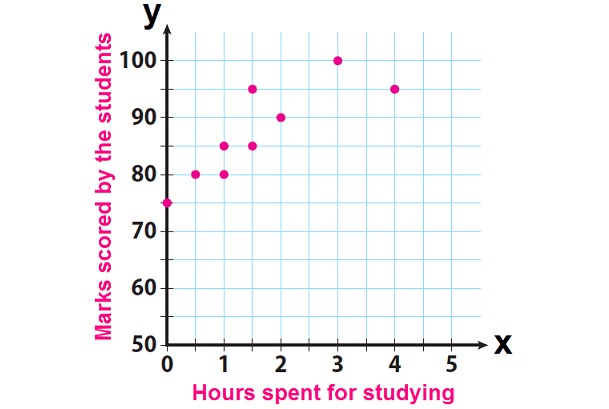 In general, when students increase the number of study hours, the marks scored by them are also getting increased.

2. Can we conclude the grade associated with studying for 10 hours would follow this trend ?

The graph shows a general upward trend, but the marks scored by the students cannot exceed 100.

3. Can we say this relationship as positive or negative ?

Because, when one variable (x) is increased, the other variable (y) is also getting increased.