Linear graphs are nothing but the graphs of straight lines. Linear relationship is being used in our day to day life. This relationship can be expressed in many different ways.

Linear graph is one way of expressing this relationship, when graphed they give a straight line. Linear graph can be sketched or plotted.

An equation such as x − 2y = −2 is an example of a linear equation in the two variables x and y. 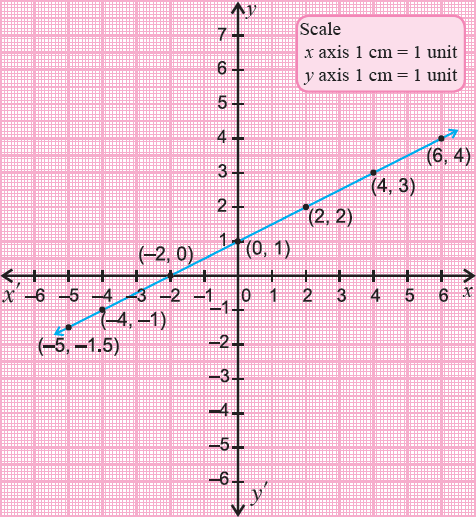 Using the above method of getting all the solutions of the equation x − 2y = −2, we can plot as many points of the graph as we please to get a good idea of the graph.

For example, the adjacent picture contains the following points (given by the dots) on the graph, going from left to right:

These points strongly suggest that the graph of x − 2y = −2 is a straight line.

Thus, a first degree equation in two variables always represents a straight line. Hence we can take general equation of a straight line as ax + by + c  =  0, with at least one of a or b not equal to zero.

For the sake of simplicity to draw lines in graphs we consider y  = mx + b. as another simple form of the equation of straight line. For each value of x, the equation y  =  mx + b gives a value of y and we can obtain an ordered pair (x, y).

Procedure to draw a Linear Graph

When graphing an equation, we usually begin by creating a table of x and y values. We do this by choosing three x values and computing the corresponding y values.

Although two points are sufficient to sketch the graph of a line, we usually choose three points so that we can check our work.

Using the given equation construct a table of with x and y values.

Draw x-axis and y-axis on the graph paper.

Select a suitable scale on the coordinate axes.

Join the points and extend it to get the line.

Draw the graph of the line joining the points

We join the points by a line segment and extend it on either direction.

We get the required linear graph. 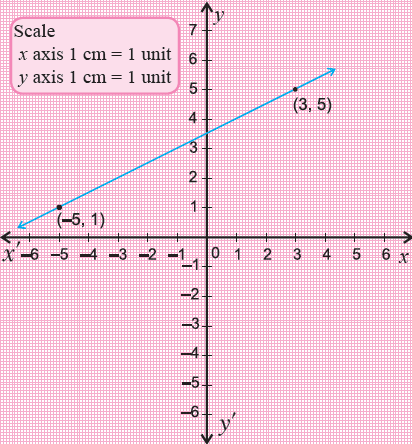 After having gone through the stuff given above, we hope that the students would have understood "Graphs of linear equations".

Apart from the stuff given above, if you want to know more about "Linear graphs", please click here