This is the function where the cost curve of a particular product will be a straight line.

Mostly this function is used to find the total cost of "n" units of the products produced.

For any product, if the cost curve is linear, the linear cost function of the product will be in the form of

The picture shown below clearly explains what each letter in the above linear cost function stands for. 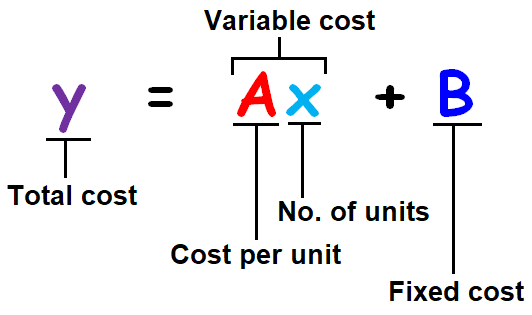 Linear cost function is called as bi parametric function. Here the two parameters are "A" and "B".

Once the two parameters "A" and "B" are known, the complete function can be known.

In co-ordinate geometry, the same linear cost function is called as slope intercept form equation of a straight line.

The following steps are involved in solving word problems on linear cost function.

First we have to go through the question carefully and understand the information given in the question.

After having gone through the question, we have to conclude whether the information given in the question fits linear-cost function.

If the information fits the linear-cost function, we have to follow step 2

We have to know what has to be found.

In linear-cost function, mostly the target would be to find either the value of 'y' (total cost) or 'x' (number of units).

In step 3,  we have to calculate the two constants "A"  and "B" from the information given in the questions. It has been shown clearly in the example problem given below.

Once the values of 'A' and 'B'  in   y = Ax + B are found, the linear-cost function would be completely known.

After step 4, based on the target of the question, we have to find either the value of 'y' or 'x' for the given input.

When we go through the question, it is very clear that the cost curve is linear.

And the function which best fits the given information will be a linear-cost function.

From the question, we have

When we substitute the above values of 'x' and 'y' in

When we solve the above two linear equations for A and B, we get