INTERPRETING THE UNIT RATE AS SLOPE

A rate is a comparison of two quantities that have different units, such as miles and hours. A unit rate is a rate in which the second quantity in the comparison is one unit.

A storm is raging on Misty Mountain. The graph shows the constant rate of change of the snow level on the mountain. 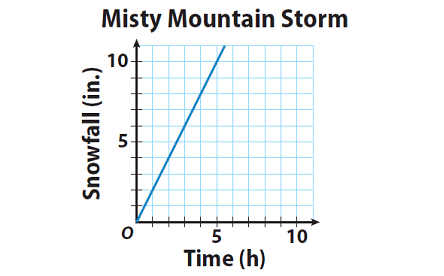 Change in y-value / Change in x-value :

B. Find the unit rate of snowfall in inches per hour. Explain your method.

C.  Compare the slope of the graph and the unit rate of change in the snow level. What do you notice ?

They are the same.

D.  Which unique point on this graph can represent the slope of the graph and the unit rate of change in the snow level ? Explain how you found the point.

Use the equation y = 2.75x to make a table for Well A’s pumping rate, in barrels per hour.

Use the table to find the slope of the graph of Well A.

Use the graph to find the slope of the graph of Well B.

Describe the relationships among the slope of the graph of Well A’s rate, the equation representing Well A’s rate, and the constant of proportionality

The slope and the constant of proportionality equal the value 2.75 in the equation y = 2.75x.