Linear model is basically the slope-intercept form equation of a line.

In the above slope-intercept form equation of line,

The slope 'm' always designates a rate of change. That is, change in 'y' with respect to the change in 'x'.

Since the slope is a positive value, we can explain this as, there is an increase of 3 units in 'y' for every 2 units of increase in 'x'.

In other words, y-intercept is the initial value value of 'y'.

In the linear model, y = mx + b, the value on the right side which is not influenced by the variable 'x' is called y-intercept and that is the initial value of y.

We can interpret the linear model y = mx + b as linear cost function.

y = mx + b is the cost function where the cost curve of a particular product is a line.

This function is used to find the total cost of 'x' units of a products produced.

The picture shown below clearly explains what each letter in the linear cost function stands for. 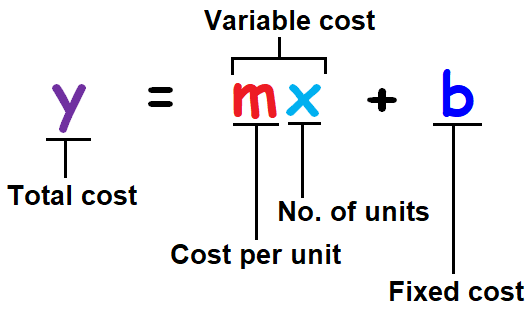 For a lemonade stand, the total cost c, in dollars of selling n cups of lemonade is given by c = 100 + 1.5n. What is the best interpretation of the number 100 in this equation?

A) The cost of each cup of lemonade.

B) The number of cups of lemonade sold on the first day.

C) The initial cost of setting up the lemonade stand.

D) The maximum total cost of running the lemonade stand.

The number 100 in the equation is not influenced by the number of cups 'n'.

So, 100 is the initial value of 'c' or the initial cost of setting up the lemonade stand.

A) The number of books in each box.

B) The number of books received each day.

C) The number of boxes received that contain boxes.

D) The number of days it takes to receive each box.

The correct answer choice is (A). 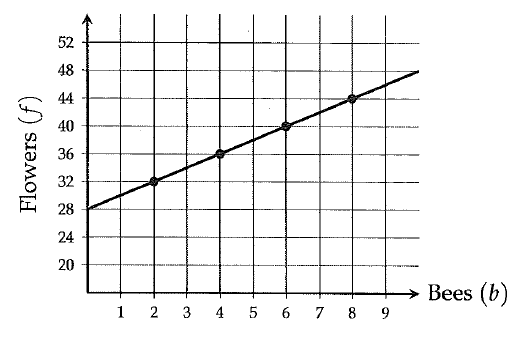 A botanist uses the graph above to show the number of flowers 'f' that blossom in a garden with 'b' bees.

(i) What is the meaning of f-intercept?

(ii) Write a linear function which describes the relationship between 'f' and 'b' and also interpret it.

So, f-intercept is the number of flowers that blossom in the garden without any bees.

In the graph shown above, f-intercept is 28.

The line goes up 4 units for every 2 units to the right. So, the slope is

The linear function describes the relationship between 'f' and 'b' :

A food manufacturer fills containers of seasoning with various spices, pepper and salt. The amount of pepper 'p', in milligrams, used in the seasoning can be modeled by the equation

Write the given equation in the form y = mx + b.

Therefore, 0.75 milligrams of pepper are added for every 1 milligram increase in the amount of salt.

Loretta works as a cook in northern Saskatchewan. She is paid $14 an hour plus $200 a week for working in a remote location. Let t represent the time in hours Loretta works each week and let d represent her weekly pay in dollars.

a) Write an equation that relates d and t.

b) What will Loretta’s weekly earnings be when she works 35 h?

c) For how many hours did Loretta work when her weekly pay was $718?

d) Can Loretta earn exactly $600 in one week? Explain.

Subtract 200 from both sides.

Divide both sides by 14.

Subtract 200 from both sides.

Divide both sides by 14.

Since the number of hours t is not an integer, Loretta can not earn exactly $600 in one week.